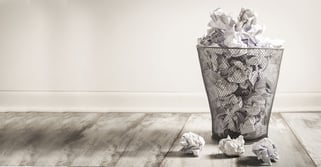 I enjoy getting sales emails. Really. Many of them provide some comic relief for my day, and others provoke some thought. I like seeing the language sales people will try to use to connect with me, and I’m really impressed when they indicate that they’ve done some research about me or my company.

The truth is, sales emails are often necessary and they are incredibly hard to write when you jump in completely cold. It gets a lot easier when you know exactly who you are talking to, what their needs are, and you have a legitimate reason to connect (other than wanting to sell them something).

So without further ado, here are some of the emails I’ve deleted this week. It’s therapeutic to share these. Enjoy. 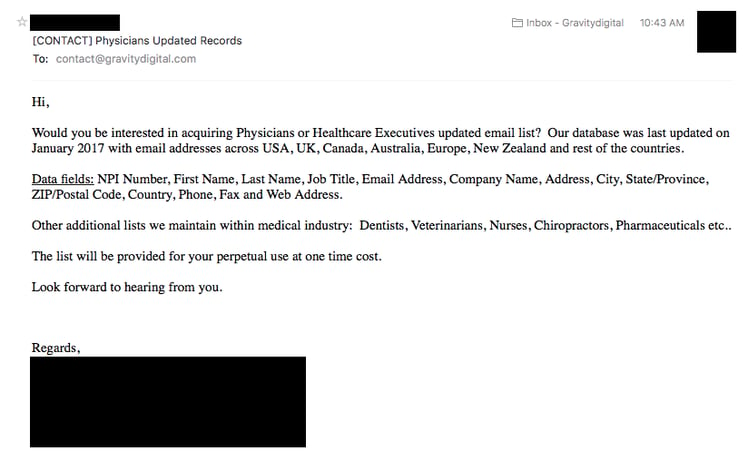 These emails always feel like they’re right off the black market. They’re selling lists to people on lists. There is no attempt to hide that this is a mass email, which is somewhat refreshing, but still ineffective. Delete.

The real estate market is back! And just in time for McRib! Best time to sell your timeshare! These are my favorite. When there is absolutely ZERO context. I don’t have a timeshare, but I do have a delete button. I have not included all the emails like this for medical marijuana, brain boosting pills, weight loss secrets, vehicle warranty offers, hearing loss and Alzheimer’s breakthroughs, collectible coins, etc., because they all fall under the mass-spam category with absolutely no context. They all seem to be masquerading as news outlets this week and they have exclusive interviews with experts that validate their products. 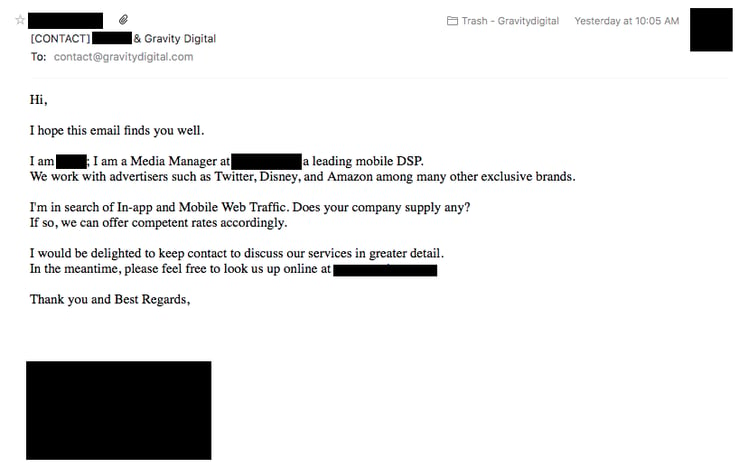 This company is from India. I know because I actually went to the website out of curiosity. We get a lot of emails from companies in India and you can always tell because they are so polite and formal. They usually start with something like “Greetings of the Day!” I like this proclamation so much that I sometimes use it when I walk into the office in the mornings. Nevertheless, deleted. We are not a fit. 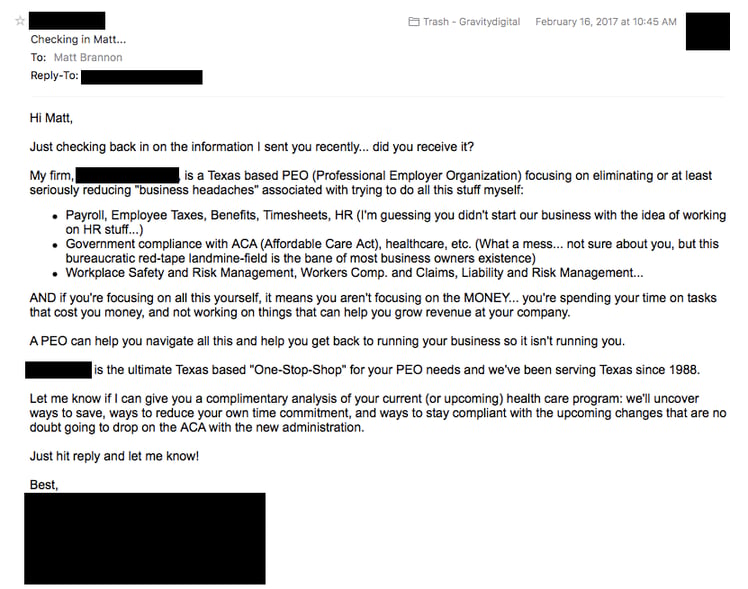 Here we go. It looks like we’ve got our first example of a salesman who’s made an attempt at prospecting for qualified leads. He used a personalization token in the subject line, and it is natural but slightly pushy. I’m not a big fan of the first sentence asking me if I’ve received previous emails, but I understand the tactic. Other than being too long, the email does a good job of trying to address what he perceives as my pain points and positioning his company as the solution. Offering a complimentary analysis is nice, but he’s jumped right to the bottom of the funnel on the first contact that I can remember. The main problem for the salesman is, we’re not in the market – or the decision phase for a product like his. I’m going to mark his email as SPAM and will likely never see another communication. It’s a shame, he did some good things and if he had offered me a low-commitment awareness stage resource like an ebook on “top issues to look out for with health plans for employers”, I might have bitten. I could have even gone for a middle of funnel resource on the benefits of using a PEO rather than using in-house resources. That's often the difference between outbound and inbound leads.  Deleted. 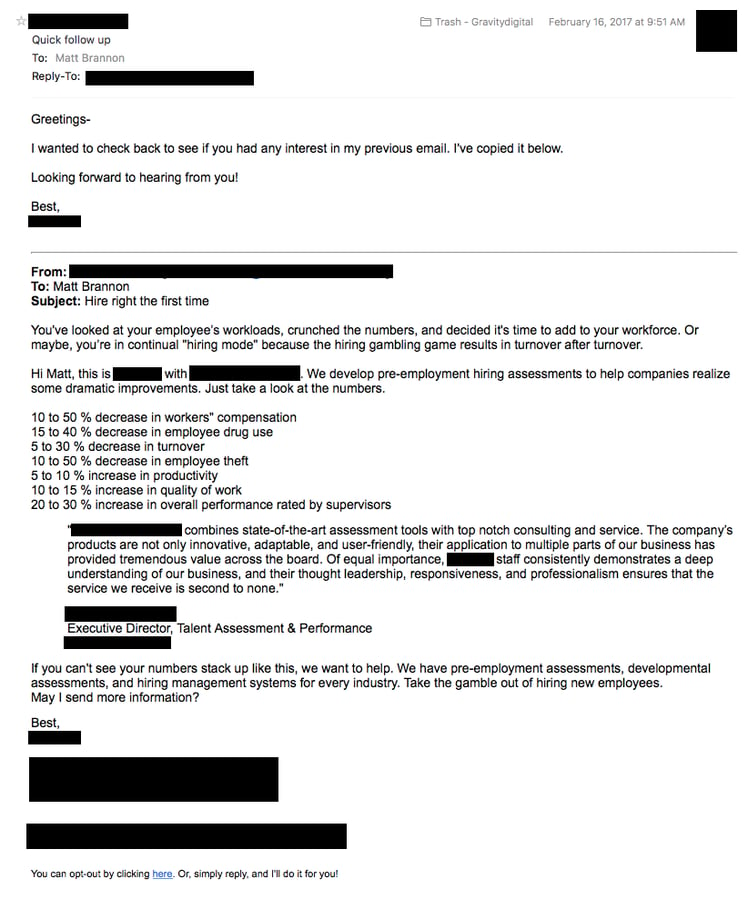 All these sales people want to “follow up”. What’s the deal with “following up”? No dude, I have about as much interest in reading your novel of an email as I do watching an infomercial. But I love the unsubscribe option, click here or reply and “I’ll do it for you”. Yeah, I’m sure that would be a simple process. Cannot delete this one quick enough. 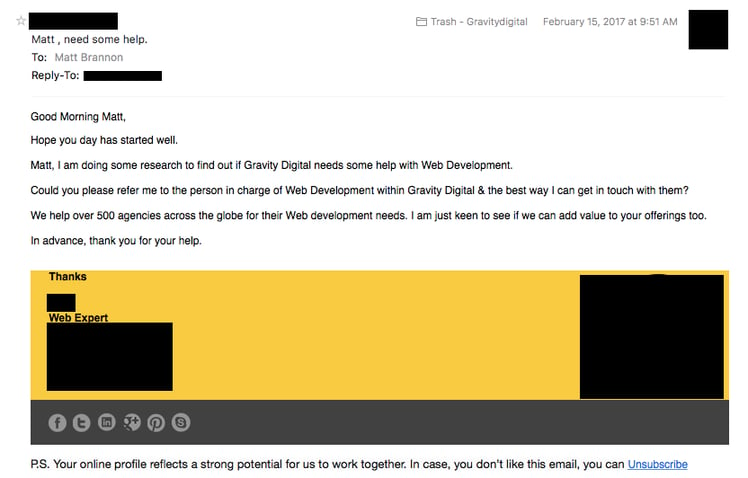 These guys win the award for persistence. They are relentless. No joke, I’ve probably received 50 emails from them. I am keen to see how quickly I can unsubscribe. Long overdue. 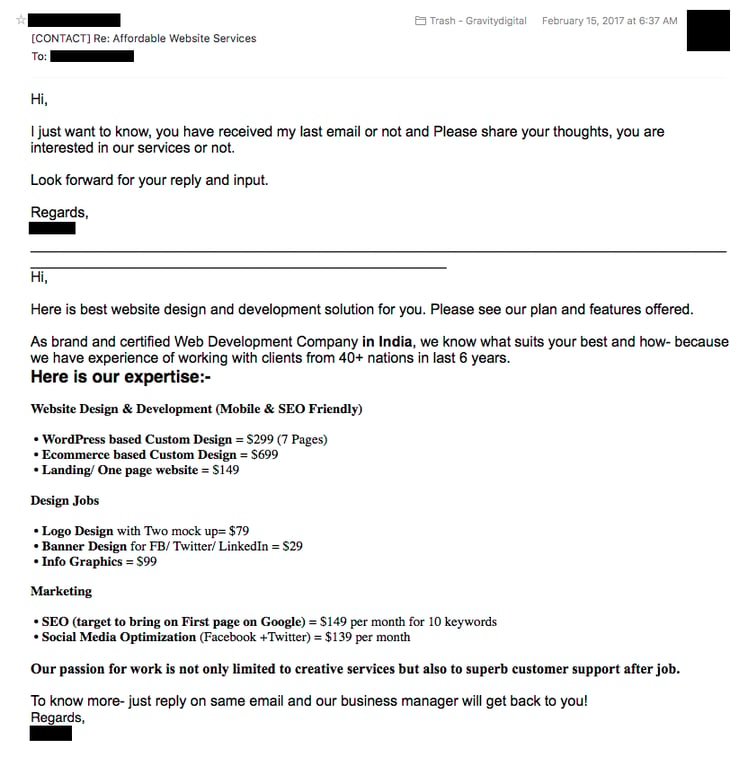 C’mon guys. A custom Wordpress website for $299! That’s crazy. I would love to see samples of their work. We could do a whole post on that. I don’t think it’s going to be a good fit. Delete.

Bro, that’s what we do. At least look at our site! Embarrassing. At least it was short. Sigh and Delete. 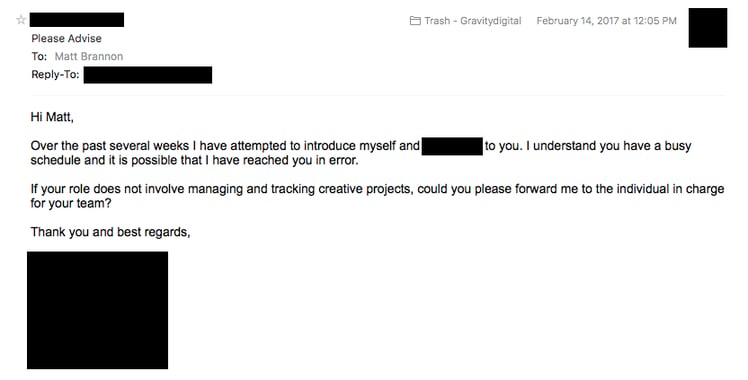 No, there is no one else on my team that you can email for “several weeks” that will get you any closer to a sale. Delete.

There you have it, a week’s worth of sales emails in the digital trash bin. Like I said at the beginning, it’s hard to write a sales email. I think that if we can just consider where the prospect is (not where we want them to be) in the buyer’s journey, and offer practical help at their current stage, we’re going to stand out in the inbox. It’s not about tricky words or subtle manipulation. Just help and find real reasons to reach out. Please send me some of your favorite sales emails, I’d love to see them (good or bad): matt@gravitydigital.com