ROAS will change your life. 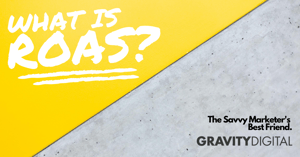 Essentially, ROAS tells you how many dollars you get back for every dollar that you’ve spent on ads.

More than any other metric, ROAS will tell you the health and quality of your advertising campaign.

When ROAS is high, it’s exciting because it can feel like you are printing money. When it’s low, it can serve as a warning and prevent you from wasting money.

We’ve seen it happen too often, when business owners don’t really know if their marketing is working or not and they just keep pumping in money because they feel like they need to “do something.” If you are spending money on advertising (or you’re paying someone else to do it on your behalf), you need to be tracking ROAS.

If you hit a ROAS of one, you’re breaking even, and that can be a very good thing. It means that it didn’t cost you anything to acquire that customer!

Anything above one is gravy.

We always set a ROAS goal of two for our campaigns, but it’s not uncommon for us to see ROAS of six or seven.

A lot is going to depend on your industry and your level of competition.

How Can I Improve ROAS?

Your ads should be:

All of these qualities should apply to your landing pages or product pages as well. Think of them as an extension of your ad.

Do I Need to Track Any Other Metrics?

… you could get away with just tracking ROAS. But that’s honestly not a very effective business model.

It’s easy to get carried away with metrics, and we like to keep it as simple as we can.

When we onboard a new client, we typically create a growth scorecard for them.

The scorecard is a great tool because it:

Do you want to know where your marketing and advertising dollars are going? Check out our 90-Day "Scale or Bail Campaign".